Our world revolves around numbers. Comparing numbers, adding numbers - everywhere we go we use numbers. Teaching children their numbers, like their letters, does not have to be a dry and boring activity. As always, you just have to take the T.I.M.E.

Go on a number hunt. Look for street signs and help your child recognize the numbers. Take the time to explain to your child the meaning and importance that numbers play in our live, especially while we are on the road.

Songs such as: "The Ants Go Marching" and "Hickory Dickory Dock" help reinforce the concept of numbers.

Put an alarm clock by your child's bed. Give them time based responsibilities such as "leave your bed in the morning when the clock shows 7 AM." If your child is just beginning to recognize their numbers, I would recommend putting a card with the time 7:00 written on it. 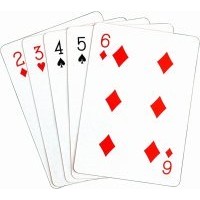 An easy way to expose your child to numbers is by playing card games such as 'War' or 'Uno'. At first, my son had to count the number of hearts and diamonds on each card to find out which one is larger.

Go on a number hunt. Look for street signs and help your child recognize the numbers. Take the time to explain to your child the meaning and importance that numbers play in our live, especially while we are on the road. 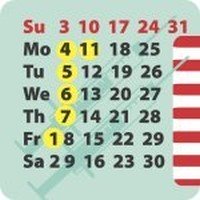 I placed a large calendar on the fridge at my son's eye level. We begin our day by reading the calendar. "What day is it today? Today is Monday, January 7, 2009. Yesterday was Sunday, January 6, 2009." This activity helps children recognize the value of numbers in our lives. It also gives them a better understanding of number orders (e.g. 7 comes after 6).

Write the numbers from 1 to 10 on cards. Using manipulative blocks or sticks, put the right number of items next to the correct number card.

Numbers in the Kitchen 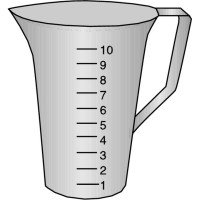 When you are cooking or baking with your child, bring to their attention the numbers in the cooking book, measuring cups and on food item boxes.

Write a number on a place mat using tape. Give your child some play dough and let them trace the number.

This book will provide you with lots of ideas of things you can count, math games you can play and other ways to incorporate math to your daily life.